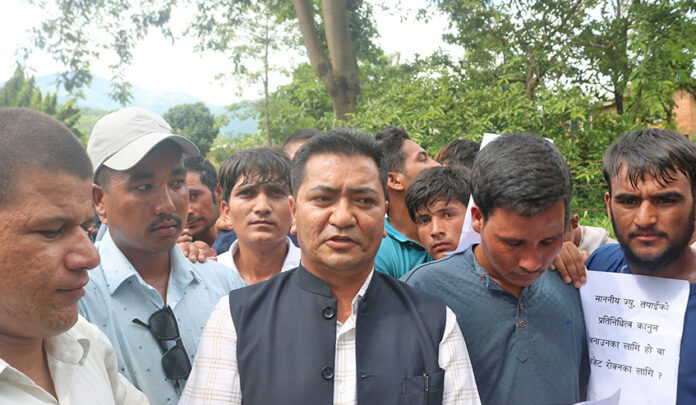 Surkhet. A demonstration was held outside the provincial assembly demanding the resignation of Karnali Chief Minister Jeevan Bahadur Shahi.

After the police tried to interfere with the demonstration, there was tension in front of the provincial assembly for a while. Demanding that three bills which are considered pillars of Karnali prosperity should be passed in the provincial assembly, the ‘Bidheyak Sarokar Samaj’ Karnali has demanded the resignation of Chief Minister Shahi.

They demanded the passage of the Sinja Civilization Preservation and Development Bill, the Mountain Science and Technology University Bill and the Karnali Innovation, Exploration and Innovation Bill registered in the state assembly. The government itself had registered the ‘Bill to make provision for Mountain Science and Technology University, 2077 BS’ in the Provincial Assembly Secretariat on November 9, 2008. A Social Development Committee has been sent to this House for discussion.

Bhandari started the agitation by forming a society concerned with the bill after the government tried to withdraw the three bills which were in the final stage of being passed in the state assembly.

NewsProvince
How did you feel After Reading this News?
Comment