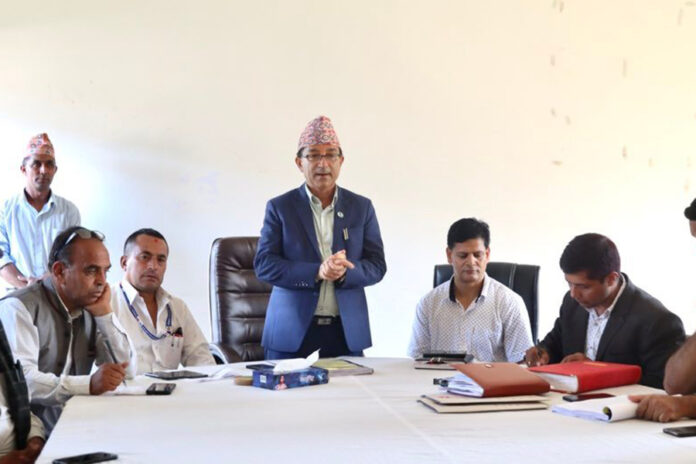 Pokhara. The Pokhara Valley Urban Development Committee has decided to cancel the agreement to lease about 63 ropanis of land.

The then mayor Man Bahadur GC had agreed to lease the land to his relatives two days before the end of his term. The committee formed to investigate the land lease case has submitted a report that the agreement was reached illegally with the connivance of the outgoing mayor and the staff.

A meeting of the city development committee on Friday decided to cancel the lease agreement on the basis of the committee’s report, said committee chairman and mayor Dhanraj Acharya. “According to the suggestions submitted in the investigation report, the entire process including bidding was flawed and it was decided to cancel the agreement and publish the information in a national daily newspaper as the parties could not be contacted,” said Mayor Acharya.

It has been decided to send a letter to the Abuse of Authority Commission and Nepal Police for the rest of the legal process. According to Mayor Acharya, the documents submitted during the investigation were also found to be tainted.

“Each of the three previous agreements has been negotiated separately. It has been found out where the weaknesses are in each of the contracted items,” said Mayor Acharya. It is mentioned that it has not been done and the issue has not been settled anywhere.

After it came to the surface that about 63 ropani of land belonging to 3 places of the city development committee was leased in an opaque manner at the price of kaudi, a 5-member committee was formed to investigate the matter. In the 169th meeting of the committee held last Saturday, the committee formed under the leadership of Dinesh Kafle, head of surveyor office, was given a mandate to submit a report within a week.

The same investigation committee has submitted a report on Friday judging that the rental agreement is illegal and non-transparent. It has been mentioned in the report that the documents of the agreement are also questionable.

The report prepared on 122 pages stated that the rent was fixed below the prevailing price, the bid recommendation committee was not formed, the committee’s invoices were reduced and the invoices were reduced, the letter sent for the publication of the information was suspicious, the registration of any letter regarding the land and structure rent of the Pokhara City Valley Development Committee and An error of no invoice number has been indicated. In addition, it is mentioned that the handwritten numbers and letters in most of the bank vouchers involved in the contract process were found to match, the proposal was accepted without receipt, and the tax payment certificate of 077/78 submitted by Sheela Shaligram along with the application form on 26 Chait, was issued by the Taxpayer Service Office in Syangja on 5 June 079. .

“After the agreement, it seems that the tax payment certificate was submitted in the file,” Sukde Gautam, a member of the investigation committee, said, “when the agreement was made on 3rd of June. The tax is due two days later.’

Gautam said that even though it was leased for 10 to 25 years, it was seen that the agreement was not made to increase the rent, even the purpose. ’25 years have been leased. It seems that the same price will be maintained for 25 years. There is no increase in price. “There is no other legal process,” he said.

‘Collusion between outgoing president and some employees’

The investigation committee mentioned that the rent was imposed without the decision of the Pokhara Valley City Development Committee.

In the report, it is also mentioned that there are various errors in the work process from the preparation of tender documents, publication of information to the contract regarding the lease of land and structures in the name of the Pokhara City Valley Development Committee, there are illegal actions such as kermatting, correction, additions, etc. has been done

“In order to conduct further investigation in this regard, we have submitted the opinion that it would be appropriate to send in writing to the esteemed Commission for Investigation of Abuse of Authority along with all the original documents related to land and structure lease agreements,” said Dinesh Kafle, coordinator of the investigation committee.

In opinion point number 2, it is mentioned that it would be appropriate to send a letter to the district police office to investigate the documents related to paragraph 25 of the Criminal Code 74 in relation to suspicious kermet related documents. Similarly, the inquiry committee has also found that the advertisement of Pokhara’s Adarsh ​​Nepal, where the notice about the tender was published, is also suspicious. The newspaper has been closed for a long time. “The first page of the said newspaper has the news of March 25, while it was found that there is news of January 26 on the inner page,” the report states, “sending a written report for further investigation on the publication of the information.”

The investigation committee has also suggested that it would be appropriate to lease the land and structures owned by the committee from now on only after approving the procedures and criteria.

Outgoing mayor Man Bahadur Ji who is also the chairman of the committee secretly handed over 63 ropani land of Pokhara Valley City Development Committee to his son-in-law Bishnu Bhandari and other companies with 2 days left to the end of his tenure without taking sponsorship and legal basis for a long time. Before the end of his tenure, he made a contract of 63 acres of land for the tourism bus park at Pokhara Rashtra Bank Chowk, the golf course of the same place and the land near the transport office, contrary to the rules. After this news came out, JC issued a statement and claimed that the decision was made according to the process.

Top 3Flash News
How did you feel After Reading this News?
Comment

Demonstration outside the Karnali State Assembly demanding the resignation of the...